Home Latest It’s a wrap from Andrew #OnLiteraryLocation in Sardinia

It’s a wrap from Andrew #OnLiteraryLocation in Sardinia 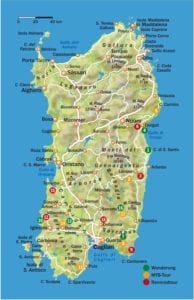 Andrew has completed his literary adventure in Sardinia, following in the footsteps of author Rosanna Ley and the places and characters in her latest novel, The Little Theatre by the Sea.

So how did it go, Andrew?

I loved every minute stalking Rosanna, her characters and locations on the beautiful, unspoiled central western coast of Sardinia.

I immersed myself in Bosa, Rosanna’s fictional Deriu and home of her Little Theatre. It is as enchanting a town as newly qualified interior designer Faye describes, when invited to visit by friends Charlotte and Fabio.

“The jumble of buildings lay mainly between the riverbank and the hill beyond; both the town and the river were backed by mountains which stood, tranquil, seemingly untouched for centuries. Faye could see what looked like a castle on top of the hill, the other old buildings sheltered beneath. The cluttered houses were painted various shades of pastel, the river snaking from the cradle of the lush mountain valleys in the east through to the sea beyond”. 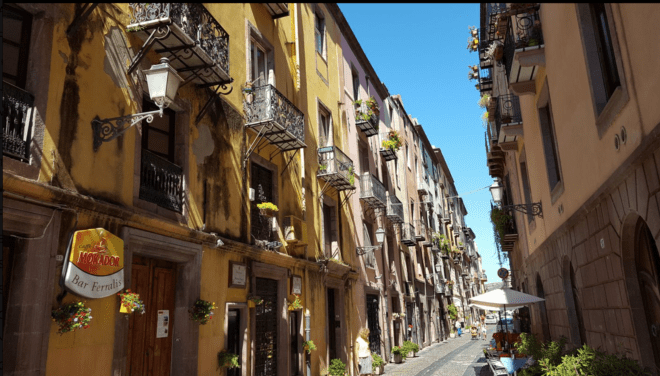 I strolled through the labyrinthine cobbled streets of Bosa, amongst the pastel-coloured houses and ever upwards to Malaspina Castle, standing guard over the old town. I walked along the river Temo, spotting the converted houses where Rosanna inserted Charlotte and Fabio, and down to the beach and marina, where enigmatic hero Alessandro worked in a boatyard. And I visited the charming Deriu Museum, from which Rosanna borrowed the name for her fictional version of Bosa. 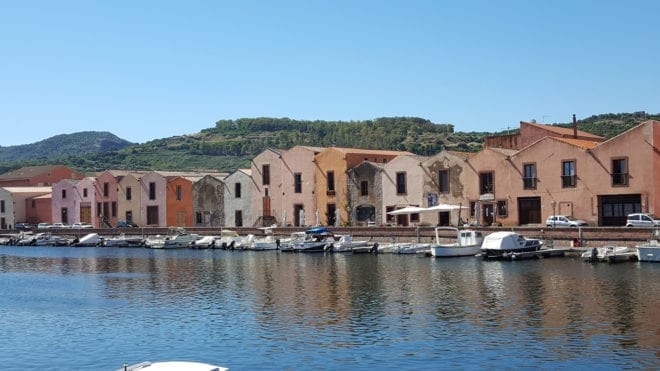 Beyond Bosa/Deriu, I drove north along the dramatic coast road to the walled Catalan city of Alghero, which Faye explores with her father Ade on a road trip, when both are looking for answers in their lives. I ate local speciality spaghetti con bottarga – mullet roe – in Alghero, although Faye ate her’s back in Deriu. And I also forced down fregola (or fregula), described by Fabio as “La Pasta Sarda” and by Rosanna as “an unusual pasta similar to couscous, often served with clams“, whereas my own version came with jet-black cuttlefish ink. 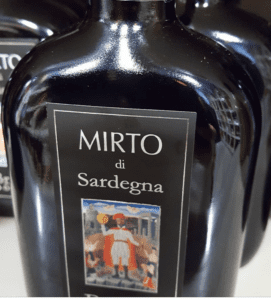 And purely in the interests of literary research, I sampled much liquore di mirto, “the infamous Sardinian digestivo made from purple myrtle berries”, as provided to Faye by Alessandro and his sister Maria Rinaldi, when discussing plans to redesign their crumbling Little Theatre.

Much further south from Bosa, as directed by Rosanna in the entertaining and insightful Q&A session we had before my expedition, I tried and failed to find the Cala Domestica, the hidden beach where Alessandro takes Faye. I did find Buggerro, the old mining town used by Rosanna and described by Faye as she approaches the hidden beach, but saw only a smart marina rather than “several rows of uninhabited, half-derelict buildings…a bleak reminder of the town’s once prosperous mining history.”

But the following day, I did stumble on another haunting ghost mining town, just a few miles north of Buggerru, near the wild landscape of the Costa Verde and the towering sand dunes of Piscinas. Pasquale, Rosanna’s sad old actor character, explains to Faye how the fortunes of Deriu resident Enrico Volti had changed over the years: “The family put all their money into mining. At the beginning of the 19th century, this country had dozens of great mines – lead, iron, copper and silver. But over the years, the profit margins, they decreased. Even in my lifetime. They had taken everything from the ground.” 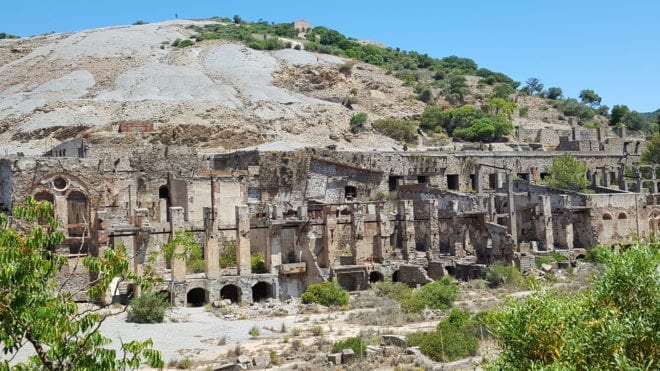 Later, Alessandro is discussing the island with Faye: She muses: “so much had been taken from this landscape and yet it was still stunningly beautiful, rugged and unspoilt.” And when Alessandro asks her if she thinks Sardinia still has a lot to offer, she replies: “Oh yes. Fabulous food, a great sense of history, glorious beaches…..” 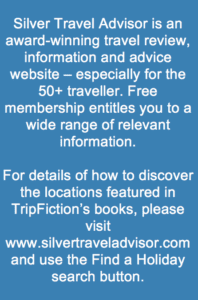 And so much more.

I would love to have followed Rosanna, Faye and the other Little Theatre characters to Sassari, to the famous Grotta di Nettuno, to Chia and to Nora. I would love to have seen old men playing dominoes in Bosa’s backstreet bars, women sewing the traditional way, on a chair in a shady cobbled street. But sadly reality has a different timescale to fiction…..

Thank you so much, Rosanna, for sharing some of your literary secrets with me, and helping me to understand what is based on Sardinian reality in The Little Theatre by the Sea, and what might spring from your fertile writer’s imagination. I loved the real-time interaction with you on social media whilst I was #OnLiteraryLocation, even if at times it felt you were enjoying a game of cat-and-mouse with me. Still, at least I finally tracked down Alessandro. Or maybe not….. 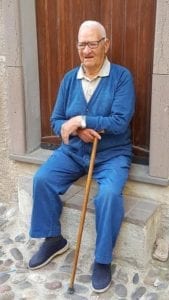